On a recent trip to Turkey, I became fascin 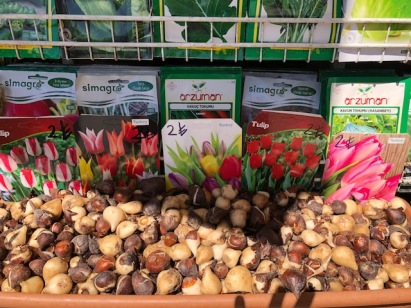 ated with tulips (Tulipa spp.) and their history. But it seemed a questionable topic for a blog post for the Herb Society of America because we all know that tulips are not herbs—or  are they?? Well, using the definition of an herb by Holly Shimizu, HSA member and former Executive Director of the U.S. Botanic Garden and first curator of the National Herb Garden, tulips definitely could qualify as herbs. According to Holly:

“Herbs are defined as plants (trees, shrubs, vines, perennials, biennials or annuals) valued historically, presently, or potentially for their flavor, fragrance, medicinal qualities, insecticidal qualities, economic or industrial use, or in the case of dyes, for the coloring material they provide.”

Tulips definitely fit the history part of the definition as they have been cultivated in Turkey since 1000AD. Tulip history did not begin in Holland.  These bulbs grew wild in central Asia and were first cultivated for medicinal purposes by the Turkish people as early as 1000AD.  Suleiman the Magnificent, Turkish ruler from 1520-1566 grew many tulips in his gardens. It is said that he gave the bulbs to his ambassadors as a gift to Holland.

Carolus Clusius, a botanist at the University of Leiden is credited with bringing these bulbs to the attention of the world in the early 1600’s. Captivated by these beautiful spring bulbs, the Dutch began to grow them and the tulip industry became a big business, leading to an era called ‘Tulip Mania.’ Speculation on tulip bulbs began and rare bulbs became extremely valuable as people speculated on tulips as they do on gold and futures today. Some bulbs were valued at thousands of dollars each. This led to an economic crisis in Holland in 1637 when the tulip market crashed, causing what some say was the first economic bubble to burst. But what survived from this crisis was that Holland became the epicenter for tulip bulb culture in the world, exporting over 3 billion bulbs annually  .

In Turkish culture, tulips became a symbol of paradise on earth. The Turkish word for tulip is ‘lale’ and when written in Arabic, it has the same letters as Allah resulting in the tulip becoming a holy symbol. Europeans are credited with naming the flower ‘tulip’ which was derived from the Turkish word for turban, which the tulip resembles.

The tulip has long influenced the arts. Ceramic tiles with tulip motifs decorate the walls, ceilings and floors of historical buildings and mosques in Turkey. Turkish ceramics today still incorporate the popular tulip flower. The tulip is the Turkish and Iranian national flower and is also the logo for Turkish Airlines. It is also the logo for the Parkinson Society as a worldwide symbol of the disease. Tulip motifs can be found in many paintings from the Dutch Golden Age and were the subject of classic and modern Persian literature. The Black Tulip is the title of a historical romance by the French author Alexandre Dumas. The story takes place in the Dutch city of Haarlem, where a reward is offered to the first grower who can produce a truly black tulip.

Some ancient medical books have reported medicinal uses of tulips.  Interestingly it is said that research on the medicinal uses of tulips was prohibited by the high cost of the bulb. Tulip flowers have been used as a poultice for insect bites, bee stings and have provided relief from scratches, itches and skin irritations, although some report an allergic reaction to it.  Tulip sap also has diuretic and antiseptic properties and has been used to treat coughs and colds. In Afghanistan, the tulip was eaten to gain strength.

Cosmetic uses of tulips include using the essential oil as a skin moisturizer. Also red tulip petals can be crushed and rubbed on the cheeks to give a natural blush and to conceal blemishes.

During World War II and the famine of 1944-45 in Holland, the Dutch ate tulip bulbs because there was nothing else to eat. They also ground the bulbs into a flour to make bread. Today, we use only the petals of the tulip in culinary preparations as parts of the bulb can be toxic. The colorful and tasty sweet petals can be used in salads or as holders for chicken or other salads. HSA member Pat Crocker in her new book Herbalist’s Kitchen: Cooking and Healing with Herbs suggests using tulips in cooking as you would use squash flowers.

Today there are more than 100 species and more than 3,000 varieties of tulips with new varieties being created all of the time. Tulips are the third-most popular flower in the floral industry.  This is no wonder because in the meaning of flowers, the red tulip is a symbol of true love.

A tiptoe through tulip history reveals the many uses and meanings of the ever popular tulip, which I believe, according to Ms. Shimizu’s definition, we could call an herb. But you can ponder that question for yourself as you plant your tulip bulbs this fall.

5 thoughts on “A Tiptoe Through the Tulips”