By Andrea Jackson, Western Pennsylvania Unit of The Herb Society of America

When I started my herbal adventure many years ago, I was drawn to unusual herbal topics.  Oh, I made my vinegars (still do) and my wreaths. My cooking was much improved. But as my herbal interests broadened and my library grew and grew and grew, I became fascinated by the history and lore of herbs.

With fall comes the witching season. What better time to explore some of the witching herbs?  While many of the plants in our gardens can be used for charms and spells, some are truly sinister plants that every self-respecting witch needs.

Mandrake (Mandragora officinarum) … In ancient times this plant was used as an aphrodisiac and treatment for infertility. It was mentioned in Genesis when the childless Rachel asked Leah for some of the mandrakes (likely the fruit) she has gathered. It must have worked since she subsequently gave birth to Joseph. Pieces of mandrake were found in the Egyptian tombs and it was mentioned in the Ebers papyrus.  How is came to be associated with magic may be lost in the mists of time but someone noticed the resemblance of the root to the shape of a man and a new charm was born.

Recall from Harry Potter how the plant screams when removed from the ground. This ear-piercing scream was said to be able to kill whomever tried to remove it. So, a special procedure was devised. Three circles were drawn around the plant for protection. Then, the soil was loosened around the plant and a black dog was tied to the plant.  The witch stepped out of the circle and called the dog which pulled up the plant.  In some telling of the tale, the dog would live if it stayed in the first circle but in most the dog was sacrificed to obtain the plant.

As if it wasn’t difficult enough to obtain a mandrake, a special procedure was needed to maintain it.  It must be bathed in wine, wrapped in white silk then covered with a black velvet coat. Each week it should be bathed and the bedding and silk changed.

Perhaps all of this was worthwhile since mandrake was believed to contain the red earth of paradise which was necessary to produce the philosopher’s stone. Oh, and it also made one invincible in battle. 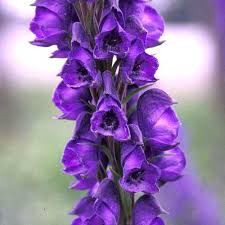 wolfsbane contains aconitine, a deadly poison, and was considered the most dangerous of all the magical herbs. This baleful plant was made by Hecate from the foaming mouth of Cerberus the three-headed dog who guarded the gates of the underworld.

If you have a stray lizard around, you can bind wolfsbane with the skin of your lizard and you will become invisible. Then think of all the candy you could snatch on Halloween.  If you are plagued by vampires and werewolves this is the plant for you since it is an effective deterrent. 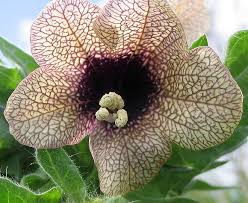 Henbane (Hyoscyamus niger)  … The plant looks and smells of death, perhaps because its favorite home is graveyards. Legend has it that henbane seeds were smoked by the Oracle of Delphi to increase his prophetic powers. Meanwhile the Celts considered it sacred to Bel, their god of prophecy.

(It is interesting to note that atropine is used in medicine to increase the heart rate and scopolamine was a component of “twilight sleep” formerly administered to women in labor so they did not remember childbirth.) 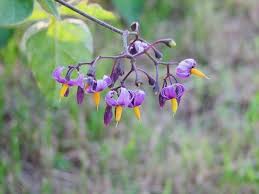 mandrake all contain atropine, scopolamine and hyoscyamine.  The plants and sometimes a bit of opium and fly agaric were included in flying ointments. This was a dangerous brew indeed.  Undoubtedly some witches got to the other side in a way they never intended.

If all this seems a bit frightening, just remember that you can keep witches away by throwing a yarrow leaf into the fire or by rubbing your floor with rue.

Andrea Jackson, R.N.,  is a master gardener with a certificate in sustainable horticulture. She has more than 30 years’ experience studying, lecturing and loving herbs. She belongs to the Herb Society of America, American Herbalist’s Guild and Piccadilly Herb Club, and the American Botanical Council.