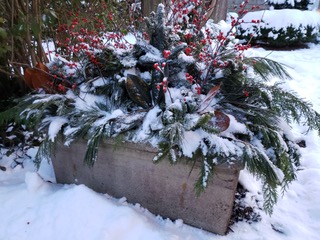 Holly, ivy, and mistletoe are common additions to our Christmas decor.  Read on to learn more about the very interesting meanings some of these traditional greens have.

The Romans first, and later the Christians, began to deck their halls with boughs of holly as it was believed to have protective powers.  Dr. Leonard Perry explains the traditional use of greens at Christmas time in his article “Holiday Greens and Their Traditions.” He said, “Holly was often hung on doors to chase away evil spirits, or else to catch them with their prickly leaves.  The Romans also considered holly sacred, a good omen, representing immortality, and sheltering elves and faeries. This latter belief may have come even earlier from the Teutonic tribes to the north.  Romans gave holly as gifts during the festival of Saturnalia– a week-long party based partly on earlier Greek and Egyptian solstice festivals.

The early Christians in Rome decorated their homes with holly as well, and it gradually became a Christmas symbol as Christianity became the main religion.  To the Christians, the holly with its prickly leaves represented the crown of thorns on Jesus, and their red berries the blood he shed.” (Perry, 2019) 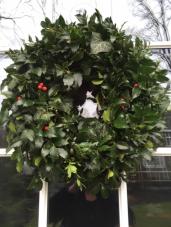 Commenting on ivy, Perry said, “The song “The Holly and the Ivy” has its roots in an English tradition from the Middle Ages.  The soft ivy was twined around the more prickly holly in arrangements.  Not only was this for aesthetic purposes, but also the holly symbolized males and the ivy females, and their combination represented a good-natured rivalry between the two.

The use of ivy as a decoration once again dates back to Roman times, when it became associated with Bacchus–the god of good times and revelry.  It symbolized prosperity and charity, and so for early Christians, it was used during Christmas– a time to celebrate good times and to provide for the less fortunate.  If ivy was growing on the outside of houses, it was thought to prevent misfortune.  If it died, though, this was a sign of approaching financial problems.”

Perry goes on to explain that “Mistletoe occupies a fascinating place in the folklore of many early cultures, especially those of northern Europe, Scandinavia, and the British Isles. A botanical curiosity, mistletoe is the only complete plant that is a true parasite, often killing the hardwood tree it infests.  For this reason, it was credited with magical properties by ancient societies and held sacred.”

The Druids associated mistletoe with luck and good fortune and used it in their winter solstice celebrations and ceremonies. One ceremony involved Druid priests climbing into trees, cutting the mistletoe and letting it fall to the people below. If the mistletoe hit the ground, it would bring bad luck. It was believed that catching it would ensure fertility for the animals. One can only imagine the scene below as robe-clad people scurried around to catch the falling mistletoe.

“In ancient Scandinavia, mistletoe was believed to symbolize peace.  If enemies happened to meet under trees with mistletoe, they would disarm and call a truce for the day.  With our images of rough Norse soldiers, this paints an interesting and seemingly unlikely picture!” (Perry, 2019)

Perry states that “Mistletoe also grows in the warmer climates, and was used as medicine by the Native Americans.  Also known as “allheal,” it was used to treat dog bites, toothache and measles.” He goes on to explain where the custom of kissing under mistletoe comes from. “Many believe it is an English custom, which dictates that after each kiss, one of its white berries must be plucked from the bunch and discarded.  When the berries are all gone, the kissing must stop.”  Mistletoe bunches with the most berries must have been eagerly sought after by young men and women.

The custom of kissing under mistletoe dates back much further though, once again to Scandinavian mythology, Dr. Perry claims. “An arrow made of mistletoe killed Balder, the son of Frigga who was the Norse goddess of love.  Her tears, falling on the mistletoe, turned into white berries.  In her sorrow she decreed that mistletoe would never again be used for death, but rather for love. Whomever should stand beneath it should receive a kiss.”

Regarding the use of evergreen branches, Perry says that “It was perhaps during the Victorian era in America that the fir and pine we commonly use today became popular.  These, together with hemlock, yew, bay, and the more historic greens, were made into lavish arrangements.  Another tradition of the 19th century was to use these to form wreaths, stars, and crosses to decorate graves at Christmas.  These greens were later brought home to enjoy through the rest of the winter, just as we do now during the holidays.”

“Rosemary is another plant with extensive holiday traditions, symbolism, and legends. Associated with remembrance, friendship, and fidelity, rosemary was used extensively during the Medieval Period. An altar decorated with rosemary ensured special blessings and protection to the worshipers. Floors of churches and homes were strewn with the herb. The traditional boar’s head for the Christmas feast was decorated with rosemary.” (“Holiday Legends,” 2003)  And there is also the legend that when Jesus, Mary, and Joseph were fleeing Egypt, Mary placed her blue cloak on a rosemary bush and the flowers turned from white to blue.

I hope these stories will add to your enjoyment of the Christmas holidays. 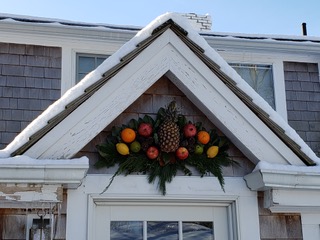 More information about legends surrounding the use of Christmas greens can be found online on these Internet sites:

Perry, Leonard. 2019. “Holiday Greens and Their Traditions.” University of Vermont Extension Department of Plant and Soil Science. Available at https://pss.uvm.edu/ppp/articles/greens.html

Susan Leigh Anthony is a longtime member of the New England Unit of HSA.She runs a garden design business named Doveflower Cottage and is a perennial buyer and expert at Kennedy’s Country Gardens in Scituate, MA.

6 thoughts on “Holly, Ivy, Mistletoe, and Other Christmas Greens”