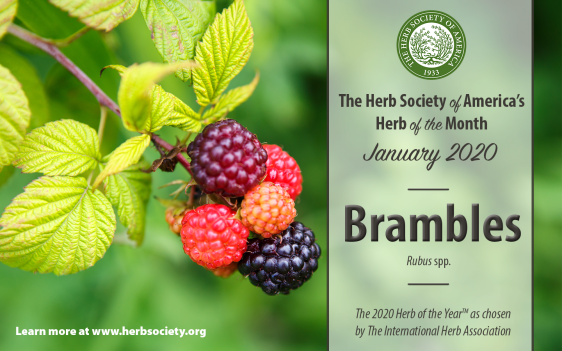 Raspberry, Rubus spp., is the International Herb Association’s Herb of the YearTM for 2020 and The Herb Society of America’s Herb of the Month for January (Brambles). The genus Rubus includes both the red and black raspberry and the blackberry as well as almost 700 other species. Rubus is in the Rosacea family.

My Wisconsin Unit of The Herb Society each year examines the IHA Herb of the Year.TM In this blog post, I have mainly focused on red raspberry leaf and have used information from many websites in writing this article. I hope you enjoy reading it as this is the year of the raspberry!

Raspberry leaves are among the most pleasant tasting of all the herbal remedies, with a taste much like black tea, without the caffeine. Raspberries are native to Asia and arrived in North America via prehistoric people, with the first records of domestication coming from the writings of the Roman agricultural writer Palladius in the 5th century. Evidence has been found that early cave-dwelling humans ate raspberries. Seeds were discovered in Roman forts in Britain, so it is thought the Romans and animals spread raspberries throughout Europe.

Red raspberries were said to have been discovered and much loved by the Olympian gods on Mount Ida in northwest Turkey, hence their botanical name Rubus idaeus, which means ‘bramble (branch) bush of Ida’ in Latin. According to Société’s Materia Medica blog, “In the story of Ida, the nursemaid to the infant Zeus pricked her finger while picking the snow-white berries, staining them red for all eternity.” (Société, 2018) Fruits were gathered from the wild by the people of Troy in the foothills of Mt. Ida around the time of Christ.

The leaf was traditionally used in ancient times to prepare the womb for childbirth, to aid delivery and breastfeeding, and some farmers used it for their pregnant goats. Other uses were as a remedy for common ailments due to its abundance of minerals, vitamins, and tannins. (Tannins help to tone and tighten tissue). Chemicals in the leaf were believed to help the blood vessels relax. The ancient Greeks, Romans, Chinese, and Ayurvedic physicians also used it widely as a treatment for wounds and diarrhea (somewhat interchanged with blackberry).

By Medieval times (5th-15th century), raspberry had a great many uses, including using the juices in paintings and illuminated manuscripts and the leaves as a woman’s tonic. Société’s blog on red raspberry states that, “In early Christian artwork raspberries were used to symbolize kindness. Its red juice invoked the energy of the blood which runs from the heart and carries love, nutrition, and kindness through the body.” (Société, 2018)  King Edward the 1st (1272-1307) was said to be the first to call for mass cultivation of raspberries, whose popularity spread quickly throughout Europe. Raspberry leaf was first described in 1597 in the book The Herbal, or A General History of Plants by John Norton, the Queen’s printer.

By the 17th century, British gardens were rich with berries and berry bushes. Culpeper (1616-1654) in his book The Complete Herbal talked about raspberry leaf as “very binding and good for fevers, ulcers, putrid sores of the mouth and secret parts, for stones of the kidneys and too much flowing of the women’s courses.”  By the 18th century, berry cultivation practices had spread throughout Europe. An old Irish beekeeper’s recipe was to gather foxglove, raspberry, wild marjoram, mint, chamomile and valerian on May day, mix with butter made that day, boil together with honey, and rub the vessel into which you want the bees to gather, both inside and out.  Place it in the middle of a tree, and bees will soon come.  Again from Société’s Materia Medica, “In Germany, raspberry was used to tame bewitched horses by tying a bit of the cane to the horse’s body. In the Philippines, raspberry canes were hung outside homes to protect those who dwelt within from any souls who may inadvertently wander in” (remember the thorns!). (Société, 2018)

When settlers from Europe came to America, they found Native Americans already utilizing and eating berries, some believing raspberry had strong protective powers against unwanted spiritual beings. Teas of raspberry leaves were given to women of the Cherokee, Iroquois, and Mohawk Nations to soothe labor pains, ease contractions, and ease nausea. Due to the nomadic nature of their culture, berries were dried for preservation and ease of transportation. 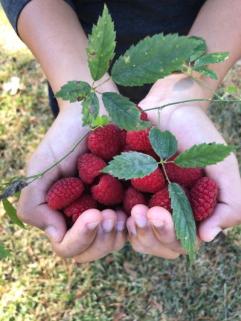 Settlers also brought cultivated raspberries that were native to Europe with them to the new colonies. In 1761, George Washington moved to his estate in Mount Vernon where he began to cultivate berries in his extensive gardens. The first commercial nursery plants were sold by William Price in 1771. Jefferson planted raspberries at Monticello on numerous occasions beginning in 1774. In 1735, Irish herbalist K’Eogh described these uses for raspberry: “An application of the flowers bruised with honey is beneficial for inflammations of the eyes, burning fever and boils…the fruit is food for the heart and diseases of the mouth.”

Raspberry tea made political history after England imposed the Boston Port Act, which exacted a tea tax on the American Colonies in 1773 to help the financially troubled East India Company. Tea made from sage or raspberry leaves then became a popular substitute for the colonists’ favorite beverage.

Collected by French botanist André Michaux and included in his Flora Boreali-Americana (1803), our native red raspberry, Rubus strigosus, is now found across much of North America, including all of Canada and the northern half of the US to North Carolina and California. After the Civil War (1861-1865), major production areas emerged in the regions of New York, Michigan, Oregon, Washington, Pennsylvania, Ohio, Illinois, and Indiana. By 1880 approximately 2,000 acres were in cultivation.

By 1867 over 40 different varieties of raspberry were known. “In 1890, JM Hodge, a Scottish solicitor and raspberry grower from Blairgowrie, rented some land specifically to grow raspberries on a larger scale. He formed the Blairgowrie & Rattray Fruit Growers Association, bringing together local producers and beginning industrial production.” (Oxfordshire Gardener, 2019)

In King’s American Dispensatory (1898), it is described that the leaves and fruits are the parts of the plant that are used for medicinal purposes. The leaves impart some of their constituents to water, giving to the infusion an odor and flavor somewhat similar to that of some kinds of black tea, and that raspberry is “of much service in dysentery, pleasant to the taste, mitigating suffering and ultimately affecting a cure.”   According to M. Grieve (1931) experience has shown that raspberry leaf has been used in cases of severe dysmenorrhea. She writes “an infusion of Raspberry leaves, taken cold is a reliable remedy for extreme laxity of the bowels. The infusion alone, or as a component part, never fails to give immediate relief and it is especially useful in stomach complaints of children.”

According to the Telegraph’s Eleanor Doughty, “In the 1950’s, Scotland, known for its raspberry growing, brought raspberries down to London on a dedicated steam train known as The Raspberry Special.” (Doughty, 2015)

Many people use it for general skin and blood purification. Some use red raspberry leaf to ease painful periods, morning sickness associated with pregnancy, heavy periods, and in preventing miscarriage, as well as to ease labor and delivery. Similar to its ancient use, a strong raspberry leaf tea or tincture will soothe sunburn, eczema, and skin rashes when used externally. Swishing with a tincture or infusion of raspberry leaf is thought to relieve sore throats and the gums, and can help alleviate the symptoms of gingivitis or gum disease. In Europe, small quantities of red raspberry leaf are a source of natural flavoring in food preparation.

The website Practical Herbalist states that “Raspberry is one of the few herbs that must be processed from dry leaves. Fresh leaves contain a substance that causes stomach upset as they wilt. Making a tincture from raspberry leaves is simple. The easiest way to process this tincture is to add dried raspberry leaves to brandy.” The tincture should be shaken regularly for a few months and then strained.

For more information on raspberries and some recipes too, please see The Herb Society of America’s January Herb of the Month web page on Brambles.

Below are websites with more information about raspberries:

Pat Greathead is a very active Life Member of The Herb Society of America and the Wisconsin Unit. She gardens in Sun Prairie, Wisconsin.