Author Jacqueline Soule will be presenting this month’s webinar on Wed, March 25 at 1pm – click here to register. This article is excerpted from her book, Father Kino’s Herbs: Growing and Using Them Today.

By Dr. Jacqueline A. Soule

Did you know that you can speak at least one word of Nahuatl, the language spoken in Mexico pre-conquest? Epazote is the Nahuatl name for Dysphania ambrosioides (formerly Chenopodium ambrosioides). English common names include wormseed, Jesuit tea, American wormseed, Mexican tea, and Jerusalem oak.

By the time of contact between the New and Old Worlds, epazote had been cultivated for well over a thousand years in southern and southeast coastal Mexico.  It was, and still is, a principal flavoring for a large number of Yucatan and Veracruz dishes and is indispensable for cooking black beans.

Like the Old World herbs cumin and ginger, epazote has the unique ability to help break down hard-to-digest vegetable proteins. These difficult proteins are found most often in beans, peas, and members of the cabbage family. A few leaves of epazote cooked in the pot with the potential offender can go a long way towards rendering the bean proteins, well, shall we say, “ungaseous.”

Epazote was popular on the coast and in warmer climates of the Aztec and Mayan areas but had also made its way into Central Mexico and the Aztec National Botanical Gardens. It was traded in the marketplace of Tenochtitlan in the 1530s.  The most popular culinary uses were to cook it with beans, nopales (prickly pear cactus pads), and fish dishes.

Ethnomedicinally, epazote has been used in a decoction as a vermifuge (against intestinal worms) and in an infusion to help induce labor, reduce menstrual cramps, and as a general post-partum tonic. It is also used in the treatment of amenorrhea, dysmenorrhea, malaria, chorea, hysteria, catarrh, and asthma. Oil of chenopodium is derived from epazote and is a proven anthelmintic, that is, it kills intestinal worms, and was once listed for this use in the U.S. Pharmacopeia. It is also cited as an antispasmodic.

Epazote was brought northward into the Southwest United States primarily by natives resettled into the region by Spanish decree. It is recorded as planted in the herb gardens at San Xavier del Bac Mission (outside Tucson, Arizona) in 1752.  Epazote found its way into eastern North America and Canada. It was a popular vermifuge as its effects were more predictable and less violent than European wormwood (Artemisia absinthium). There are no reports of Yankees using it for culinary purposes.

Plant epazote from seed in spring once night temperatures rise above the low 50s. You can also start indoors and transplant once danger of frost is past. Seeds can take as long as four weeks to germinate. Plants will thrive through the warm season and freeze to the ground at 35℉, but often regrow from the roots. At 20℉, the roots will be killed as well.

Epazote plants do well in full sun, but some afternoon shade is appreciated in the Southwest by this tropical herb. Soil can be poor, even clay, but plants grow best in average, well-drained soils. Epazote can be grown in containers that are at least twelve inches deep.

Epazote can reach five feet tall, but at that height, it will be scraggly and unattractive. Pinch epazote plants often, especially the central branches, to keep it around two to three feet tall, compact, leafy, and with an appealing form in the garden. Usually a single plant

provides enough herbage for a household.

Epazote reseeds readily, so pinch off the seed stalks, or be ready to ruthlessly weed out excess plants the following spring. On the other hand, seed heads turn an attractive bronze in autumn, and the lesser goldfinches enjoy the seeds. Ideally, find a less-used corner of the garden for epazote where, if seeds spread, they will not be a major problem. A strongly scented herb, epazote is reported as a deer repellent, and I can report that javalina, jackrabbits, and cottontails avoid eating the plants.

Epazote is best used fresh for culinary purposes. Chop or mince leaves and add early to dishes that require long cooking, like beans, roasts, soups, or stews. Use one tablespoon minced leaves per cup of beans or to a two pound roast. Do not use it as a garnish since the taste is bitter. If not fresh, frozen epazote may be used as a culinary herb. In my tests, epazote does not have the same “digestive” effect after drying. 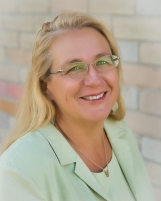 Jacqueline writes about gardening for a living. It’s a job she does in two very different USDA zones – 10 and 4. Nine months of the year she lives on an acre in the Tucson Mountains, and 3 months on an acre in Vermont. In both places she happily grows numerous herbs because they are about the only plant the local critters will not munch to the ground.

© copyright Jacqueline A. Soule. This article is excerpted from Father Kino’s Herbs: Growing and Using Them Today written by the author. All rights reserved. You must ask permission to republish an entire blog post or article. You can use a short excerpt, but you must give proper credit, plus you must include a link back to the original post on our site. No stealing photos. To purchase this and other books by Jacqueline Soule, visit her website.

4 thoughts on “HSA Webinar: Growing and Using Herbs of the Southwestern Missions”