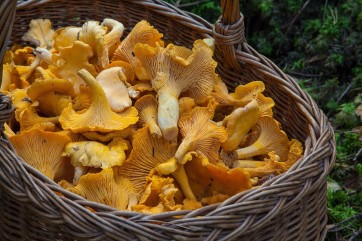 For many people, mushrooms, lichen, and other fungi are exotic forest species. For the amateur, they are difficult to recognize by name, while for those seeking to harvest them, identification is overwhelming. Unlike traditional herbs and plants that can be grown from seed, examined in botanical gardens, or readily studied in books, mushroom knowledge can be difficult to cultivate. They appear at intermittent times in the forest or in your lawn, and require a delicate balance of weather, mycorrhiza (i.e. that symbiotic relationship between fungi and plants and trees) in the soil, and underground relationships with other organisms. All of these added together can challenge even the most adventurous gardeners.

The thought of studying and learning to identify mushrooms is overwhelming on the best of days. At one time, mushrooms were classified in the plant kingdom because they grow out of the soil and have rigid walls; however, they contain no chlorophyll and therefore, don’t photosynthesize, so were moved to the realm of the fungal kingdom. There are over 10,000 known types of mushrooms, and mycologists suspect that this is only a fraction of what is growing in the world.

To start your foray into the world of mushrooms, join The Herb Society on April 16th at 1pm EDT for our webinar, “Macrofungi – The Basics of Mushrooms” with Jay Justice, a noted mycologist.

Jay Justice is a retired state epidemiologist from Arkansas, and for over 40 years has studied the macrofungi that can be found in the Southern and Southeastern regions of the United States. He is a co-founder and scientific advisor for the Arkansas Mycological Society (1982) and a scientific advisor to the Cumberland Mycological Society, as well as a chief mycologist for the Missouri Mycological Society. In past years, he participated in several conferences associated with the study of the macrofungi that occur in the Great Smoky Mountains National Park in North Carolina.

Jen Munson is The Herb Society of America’s Education Chair. She discovered herbs when she stumbled upon her local unit’s herb and plant sale and hasn’t looked back since. Just recently she celebrated being a member of the NorthEast Seacoast Unit for 15 years!

One thought on “HSA Webinar: Macrofungi – The Basics of Mushrooms”