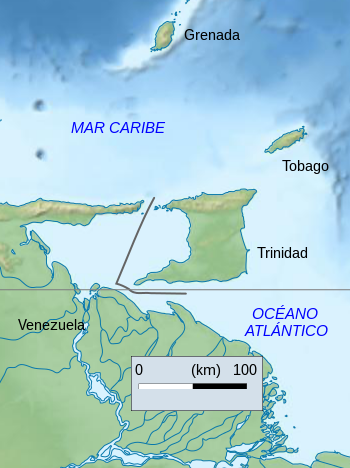 Last week we looked at some of the beverages important to a Trinidad Christmas. Now let’s talk about some of the foods and the special ingredients needed to make them.

So what is on the menu in Trinidad for Christmas? Here is what Ann told me. “Dinner is ham, of course, pastelles, baked chicken, fried rice, pelau, callaloo, macaroni pie…and everybody makes homemade bread. And, of course, sorrel drink and ponché de crème. And you have to have black cake, of course….Everything is homemade, nobody buys anything.”

Pastelles are the West Indian version of tamales and reflect the Mexican/Aztec heritage in the Caribbean. Making pastelles can be labor intensive, and according to Ann, many families make the work fun by turning it 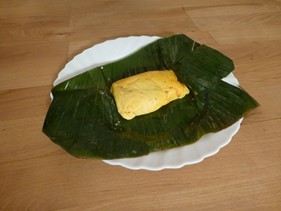 into a party and making large quantities assembly-line style. This is part of what makes them such a Christmas treat. Every island has their own version, and in Trinidad, it is traditionally cornmeal stuffed with beef, chicken, or pork (or a mixture) with olives, capers, and raisins and steamed in banana leaves. There are also versions made with fish or shrimp, and vegetarian versions made with soy products, lentils, or mushrooms. It is the flavorings that really make them special, and the usual additions include onion, garlic, tomato paste or ketchup, Worcestershire sauce, Trinidad pimento peppers, and roucou.

Pimento peppers are ubiquitous in Trinidad cooking, but they are NOT the same pepper we call pimento here in the United States; they do not look or taste the same other than both being non-spicy. They are a completely 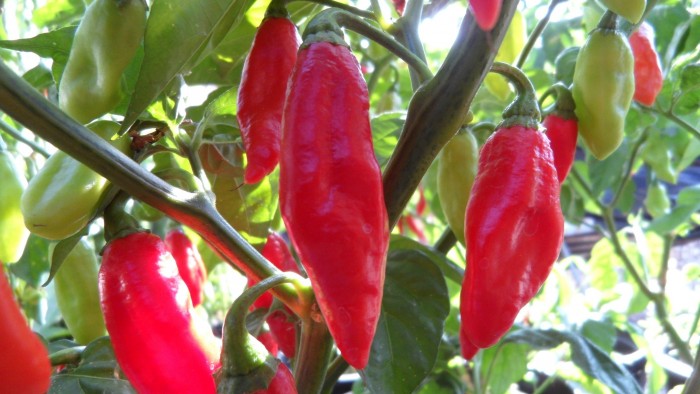 mild Capsicum chinense (the species known for blazing hot peppers like habaneros) and are easily found in most Caribbean markets here in the U.S., as well as most backyards in Trinidad, according to Ann. The taste is described as the flavor of very hot peppers without any of the heat, and they are an essential ingredient in many dishes. This pepper seems relatively unknown outside of Caribbean circles, but you may find seeds marketed as Capsicum ‘Trinidad Pimento’ or ‘Trinidad Seasoning Pepper.’

Roucou (pronounced roo’-koo) refers to the fruit of Bixa orellano, a shrub or small tree native to Mexico, Central America, and parts of South America and is cultivated in many countries. It is more widely known by the common names annatto and achiote and is used as red/orange dye and food coloring and flavoring. The 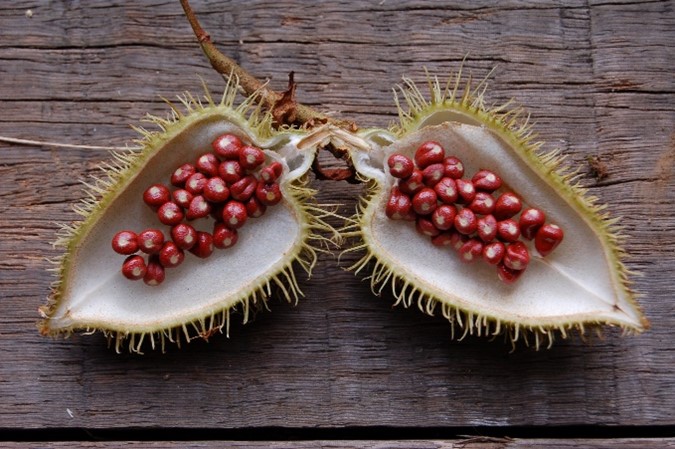 color comes from the waxy coating that covers the seeds. In Trinidad, it is common to grow roucou in your yard. The spiky capsules are harvested when ripe, split open, and the seeds are removed. The seeds are placed in water, then soaked and agitated (wear gloves!) to release the coloring. The now vibrant red/orange liquid has salt added as a preservative, the seeds are strained out, and the liquid is refrigerated to use as needed. It is a common ingredient in many dishes in Trinidad and adds not only a beautiful color but a subtle unique flavor as well. Annatto powder may be substituted and is easily purchased online and at International markets.

Another dish commonly eaten at Christmas, and especially at New Year’s (which is called “All Years Night” in Trinidad), is the unofficial Trinidad national dish pelau (pronounced pay-lau’ or puh-lau’). Pelau is a hearty one-pot meal of chicken, rice, and pigeon peas flavored with onion, garlic, Trinidad pimento peppers, and a delicious flavor concoction called green seasoning.

What is green seasoning, you ask? If you looked inside many refrigerators in Trinidad, you would find a fresh batch of this green herbal magic. There is no set recipe, and it can be simply made with whichever ingredients are on hand. It can also be purchased bottled, but fresh is far superior. Ann says it generally includes garlic, Trinidad pimento peppers, chives, cilantro, celery, green onions, thyme, chadon beni, and pudina. 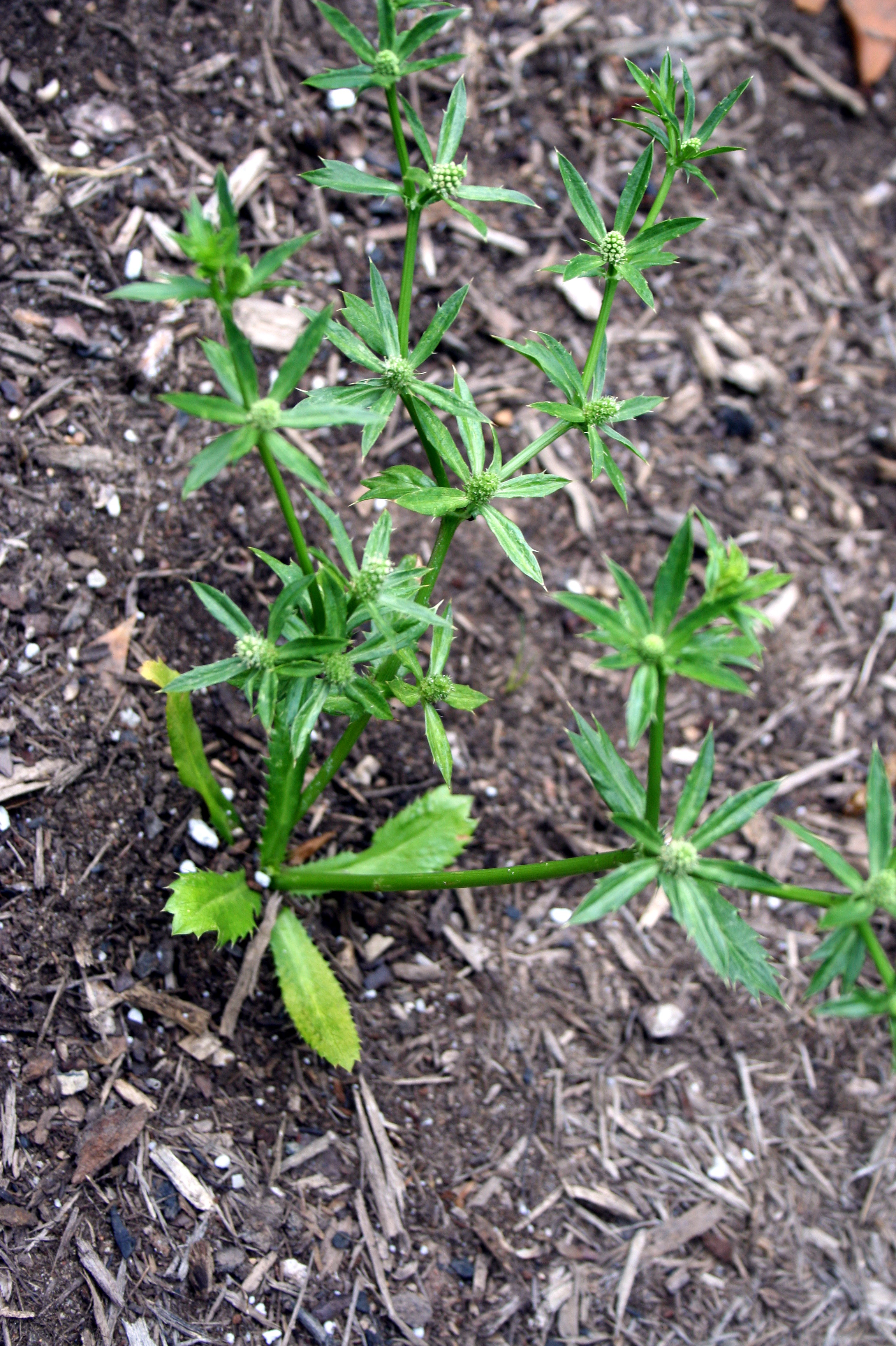 Chadon beni (pronounced “shadow benny”) is the common name for the leaves of Eryngium foetidum, a tropical perennial in the carrot family (Apiaceae) and known in the United States as culantro. Imported by French settlers, the name derives from “chardon béni,” which means “blessed thistle.” (It is not actually a thistle but looks a bit like one.) According to Ann, it grows like a weed everywhere in Trinidad and is easy to cultivate. The flavor is similar to cilantro but even stronger and more pungent. It is one of several herbs that are an essential component of the flavor of Trinidadian cuisine. The fresh leaves can usually be found in Caribbean markets.

Pudina is the local name for Plectranthus amboinicus (syn. Coleus amboinicus), a fleshy-leaved perennial in the mint family that is known by many common names: Mexican mint, Spanish 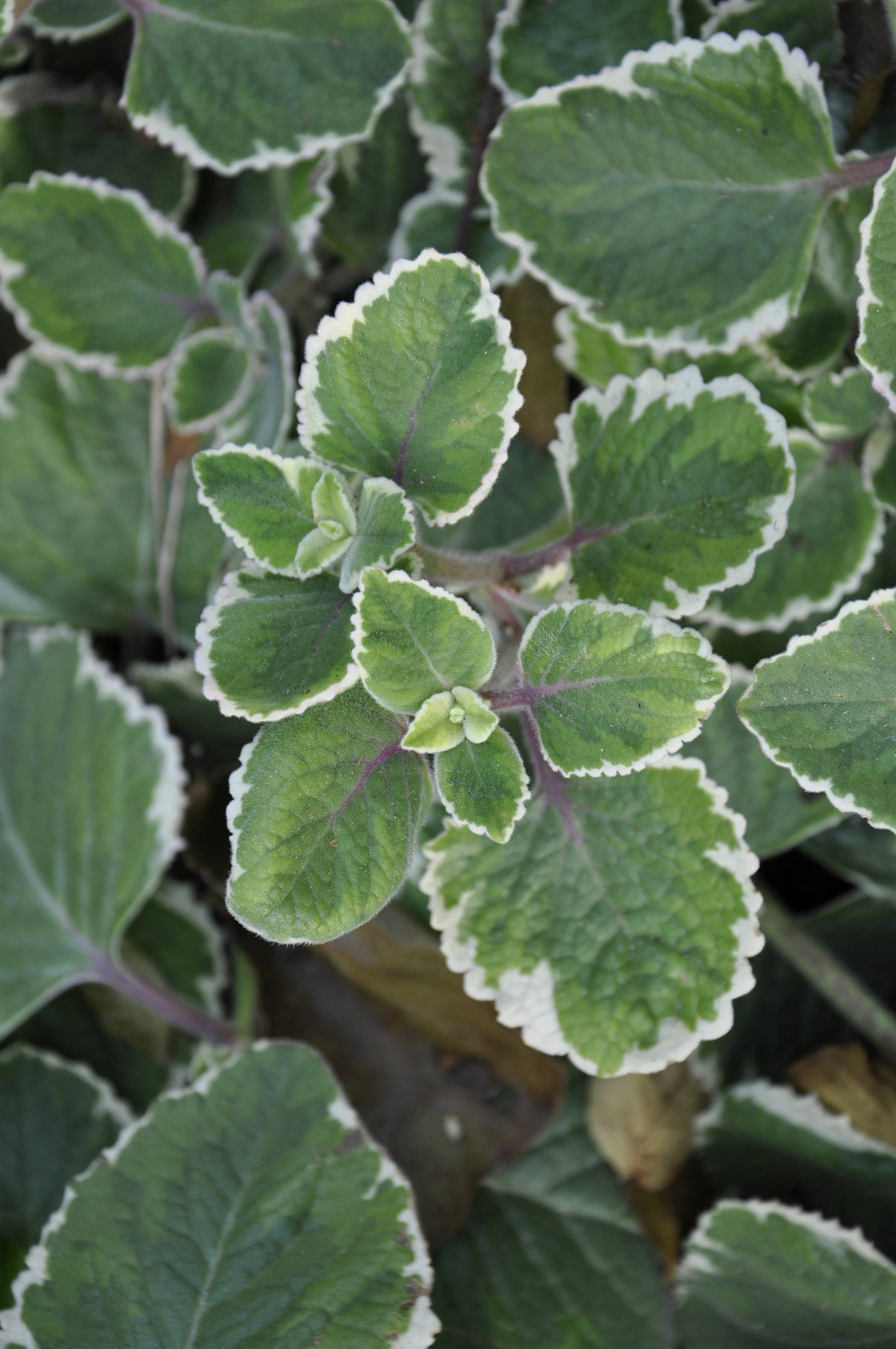 thyme, Indian borage, Cuban oregano, and many more. It is naturalized and cultivated widely in the tropics and as an herb. It has a strong oregano-like flavor.

For dessert, they have black cake, a dense, rich, and alcohol soaked fruitcake believed to have descended from British desserts such as plum pudding. It is quite different from American fruitcake. It is made with lots of butter, eggs, and rum, and is almost black in color due to the addition of “browning,” which is made by almost burning brown sugar syrup. Browning can be purchased, or in a pinch, molasses can be substituted. Black cake is one of those foods for which every family has their own closely guarded recipe with a slightly different ratio of spices and fruits. Most recipes I found online direct you to soak the dried fruits in alcohol for at least a few days or weeks. But according to Ann, it is an important tradition to soak them for an entire year! Just after 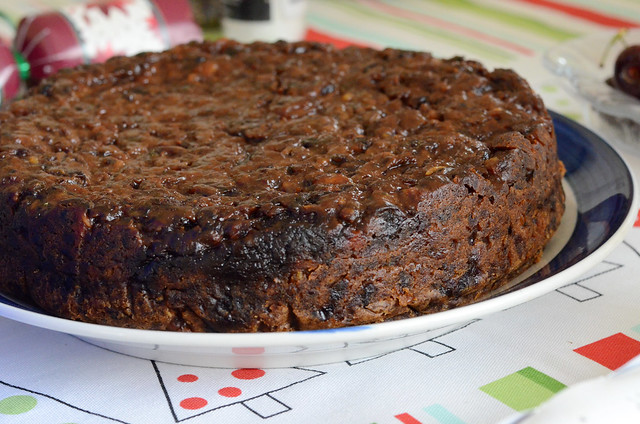 Christmas, you prepare the fruits and cover them in a jar with a blend of alcohols and leave it in a dark place for a year, shaking periodically. Spices are also essential to making the quintessential black cake, which typically include cinnamon, allspice, nutmeg, clove, and tonka bean.

Tonka bean is the seed of Dipteryx odorata, a tropical tree in the pea family (Fabaceae) that has a complex and highly prized flavor said to remind one of a blend of vanilla, cherry, almond, cinnamon, caramel, and honey.

Because it contains coumarin, a chemical that is toxic in larger amounts, tonka bean has been banned as a food ingredient in the U.S. since 1953. It is now better understood that the concentration of coumarin in tonka bean is too low to cause illness without one consuming a nearly impossible quantity. However, the ban remains.

So, now you can set your table with a feast including ham, pastelles, pelau, and black cake. And to drink you’ll have sorrel drink, ponche de crème, and ginger beer. The house is freshly painted and new curtains have been hung. Neighbors and family will be dropping by soon. Panang music will fill the air, and the rum will flow. Merry Christmas from Trinidad!

Recipes from Ann Abdul and/or adapted from “The Multi-Cultural Cuisine of Trinidad & Tobago & the Caribbean” which is the 2002 updated version of “Naparima Girls’ High School Diamond Jubilee 1912-1987, Trinidad & Tobago Recipes”. These are the quintessential books on Trinidadian cuisine found in almost every home.

(If using banana leaves, scald until soft and pliable.)

You can also prepare in large batches and freeze in ice cube trays and store cubes in freezer bags. These quantities are merely suggestions. Most people develop their own recipe with their own preferred ratio of ingredients based on personal preference.

As alcohol soaks in, pour more and continue to do so for 12 hours.

Amy Forsberg is a horticulturist who was the 2000-2001 National Herb Garden intern. She has gardened at the U.S. Botanic Garden (2002-2005) and the U.S. National Arboretum (2006-2018). She has long been fascinated by the history of herbs and spices and their role in creating culture and cuisines.