By Paris Wolfe, Blogmaster, The Herb Society of America

When Martine and Edgar Anderson retired five years ago, they moved to remote Washington Island in Door County, Wisconsin and started their second careers as lavender farmers.  On the north edge of the “lavender belt,” Washington Island is in growing zone 5B.

Martine was following a childhood inspiration; she grew up in the South of France where lavender farms were a part of life. The versatile, aromatic herb romanced her and never left.

The couple started strategically. Martine had been growing a few lavender plants that were doing very well in the growing zone. “Before we got to the scale of the business, we planted several varieties and realized that they could survive,” says Edgar. “But, before we started the farm, we did a lot of research with the University of Washington, talked to growers, talked to researchers and compared notes on soil samples, climate data.”

“The soils here are sandy,” he notes. “Good drainage is a must-have for lavender because they don’t want wet feet. Lavender is prone to fungal disease.”

The growing parameters on the Wisconsin island measured up. So Fragrant Isle Lavender Farm, Shop and Bistro is a 21-acre farm with 14,000 plants – 10 varieties — growing on five acres of land. Plans call to more than double cultivation in the next five years.

With supply, they needed demand. And, that hasn’t been a problem either.  “The lavender industry in North America is small, compared to Europe and New Zealand. It took a big jump in the United States starting in the 1990s,” he says.  And, he sees a need for U.S. growers to meet mounting demand.

The top lavender producing country is Bulgaria with 150 tons in 2015, according to Ukraine Today and other sources. That’s followed by France, New Zealand, Ukraine, Russia, Australia and the Mediterranean region.

Martine laments that U.S. lavender oil and lavender-scented products often come from China, where quality control is lax and purity may be questionable. “That’s not what you want to buy. We use pure oils, undiluted oils,” she says.

Though all lavenders are edible, Fragrant Isle grows different varieties for aromatic and culinary uses. Martine notes the strong aromatics (some camphor-like scents) are off putting for culinary uses.

Both variety and harvest differ for the two. “For aromatic uses like oil, you want to let them grow longer, so the buds swell and the compounds mature enough so you can extract quality oils,” she says “The weather plays a big role in when to harvest. If it gets hot early in summer, it happens sooner.”

“If you’re harvesting lavender buds, you have to watch when the flowers are only 30 percent open.” 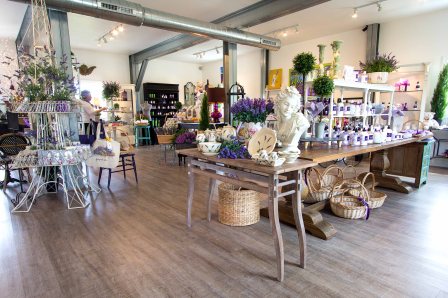 In addition to the farm, Fragrant Isle has a café that serves lunch and has dinner hours on weekends. The 2,000-square-foot shop sells more than 150 products including body lotions, soap, body wash, linen spray, insect repellent, after shave and more. All use lavender from the farm.

“We are constantly looking for commercial ways to use lavender,” says Martine.

Diners at Le Petit Bistro experience culinary use they may want to repeat at home. “We use it in teas, in baking. We use it on fish, tenderloin, beef. We do sugar infused with lavender. We make jam,” says Martine. A recent menu item was Lemon Glazed Cake with Lavender Rhubarb Puree and Whipped Cream.

While Martine and Edgar are quick to share their knowledge, they’re making it more fun with a Lavender Festival on July 22, 23 and 24, 2016. Timed for the flowering season, they’ll offer lessons in lavender chocolate-making and lavender wand-making. Music is scheduled throughout the festival and visitors double their stress relief with massages in the field. More than 5,000 guests are expected to visit the three-day event. For details on getting to the island and more, check out their website.

Review by: Paris Wolfe, Blogmaster, The Herb Society of America 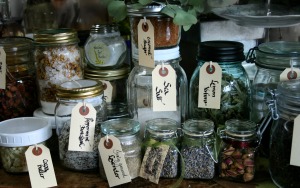 Draw a bath, drop in lavender essential oil, fluff an oversized towel, silence your mobile phone. OR slouch into your favorite garden chair, with sassy sunglasses and a sweating glass of iced tea.

Put a journal and pen nearby. When you’ve dried off from the bath or finished your tea, you’ll want to create a list. Goetz uses 19 herbs to build 50 recipes. You might harvest the botanicals, but you’ll want a shopping list for salts, oils, packaging and more.

Hers are recipes for women of the 2010s. Sophisticated and easy on your time. Peppermint foot soak uses four ingredients; lavender green tub tea uses just two. Not sure how to package your final products? The lush images throughout the hardcover book are inspiring: Canning jars, antique glassware, ribbons and tags.

Goetz says her creative drive inspires her garden. “I tend to think ‘What can I make with this plant?’ before I put it in my garden,” she says. Working with these herbs through time has been both inspiration and test laboratory for her.

“The recipes I have included are ones that I have made over the years,” she notes. “But I must say I am always experimenting, refining and learning with new ideas, recipes and keeping up with the study of what herbs can do for us.”

While she doesn’t claim a favorite recipe, she admits, “The ones I tend to make regularly are the lavender salt scrub because it is a nice way to treat my hands after a day of gardening; and rose water or lavender water in a spray bottle is a refresher to lift the mood in my office or a mist of fragrance on my clothes and hair as I go out the door.”

Goetz has chosen both her bathroom and garden as relaxation spaces. “This morning I hung a fresh bundle of eucalyptus (I grew it in a pot over the summer) from the shower to clear my head and have a mini-spa moment. The house still smells wonderful,” she says. “In the garden, I have a comfy wicker chair that gives me a quiet retreat space.”

Herb Society members get a 10% discount on herb materials at Richters. Find membership login information on the society’s website.

The Herb Lover’s Spa Book is in the HSA library.  Like all books, members can borrow it via email or phone call. It will be mailed out and must be returned after 30 days. Non-members can stop by the Herb Society to peruse it in the library.

Paris Wolfe has been a journalist since the mid-1980s. She’s been herb gardening since she moved into her first house in 1990. Writing about food, and herbs, has been a passion throughout her career. She’s written for The (Lake County) News-Herald, The (Cleveland) Plain Dealer, Cleveland Magazine and so many more publications. Her credentials include a Master of Arts degree in public relations. Working on a blog with The Herb Society of America is a natural progression of her writing talents.

“I’m excited to be working with the Society. There is so much potential to extend its reach into untapped communities,” she says. “Gardening is on the upswing with 35 percent of 12 percent or 14 million households (2009) engaging in herb gardening.”

“The herb gardening market is a $653 million industry with the average home gardener spending $85 per year,” Paris notes. “Of these gardeners millennials (18-34) are the fastest-growing segment.”

Paris believes in research-based communication and that includes talking to experts about their experiences and knowledge. She hopes to incorporate those talents in the blog and other activities of the Society.

Her favorite herbs are basil, cilantro and lavender. Just ask “Why?” And, she’s partial to mint for mojitos. She can’t grow catnip because it attracts stray cats and she already has four.

Paris lives in Concord Township, Ohio, with her sons Dante and Dominick. She enjoys gardening, cooking, dining out, reading and skiing.

If you have questions or blog ideas, you can contact her at pariswolfe@yahoo.com