After watching a video online about making paper from corn husks, I thought it would be fun to try. I had never made paper before, but the video made it look easy. Don’t they always?! I first made some using the husks from six ears. After it didn’t really go well, I bought a book with more detail and tried again.

Corn husks and stalks are some of the many plant materials commonly found in home gardens that can be made into paper. Grass and leaf fibers are some of the easier materials to work with. Those who have more time on their hands venture into using bast fibers, the fibrous material in between the outer surface layer and the inner core of certain plants’ stems. Harvesting it involves peeling stems apart one by one and stripping out the bast fibers. Grass and leaf fibers only need to be picked and washed and sometimes cut into smaller pieces prior to processing.

All plant fibers need to be cooked for several hours in an alkali solution*, a mixture of water and soda ash, washing soda, wood ash lye, lime, or caustic soda (also called lye). Because the amount of alkali you add to the water is based on the dry weight of the plant material, you need to dry, weigh, and rehydrate your plant materials prior to adding to the pot. Cooking breaks down the fibers, and the alkali dissolves non-cellulose materials, like lignins and waxes, that can cause discoloration or prevent the fibers from freely separating. There are pros and cons to each type of alkali, but the trick to using any of them is that you need to balance out the strength of the alkali with the strength of the fibers. Too weak and you will be boiling your fiber for days; too strong and you will damage the fiber.

Once the fibers pull apart easily, you can use a blender to turn them into pulp, or you can do it by hand using a flat surface and a bat, mallet, or meat tenderizer.

Once the material is no longer stringy, you add it to a vat with some water and make the paper. This typically involves using a mould and deckle, which is a two-part frame with a screen that you dip into the vat. An alternative is to use a deckle box, which is a deep box on top of a screen that you pour the pulp into. Both of these serve to evenly distribute the pulp and keep it in the shape you want.

Once the liquid has sufficiently drained back into the vat, a papermaker typically transfers the wet paper onto a wool felt or towel in a process called couching. Once much of the water is absorbed by the felt, the paper can then be pressed and dried.

On my first try, I cut the husks up into small pieces and then boiled them using washing soda as my alkali. Then, I used a blender to turn them into pulp. Everything was going as planned. But then? Because I was not sure if my first try would also be my last, I didn’t want to go through the trouble of

buying or making a mould and deckle and instead poured it through a screen. I ended up spreading it around with my fingers. When I tried to remove the paper from the screen, the pulp stuck to it and wouldn’t come off. Apparently, the screen needs to be wet before it comes into contact with the pulp, a detail I only learned later after I bought the book. And then instead of pressing it, I merely laid it out to dry. My result was lumpy paper with a lot of conkling, a term used by papermakers and watercolor artists for the wavy imperfections in dried paper.

Because my brother had a field of corn he couldn’t sell this summer, I had plenty of free material to try again. So why not? I made a small mould and deckle from two round plastic containers, some foam, and a piece of an old window screen with the intention of making small paper circles that I could decorate with corn husk ribbons and string together like a garland. Then, after drying the husks from three dozen ears, which weighed about a pound, I rehydrated them in a five-gallon bucket. Because I have an endless supply of wood ashes from my woodstove, I decided to be overly ambitious and made my own wood ash lye, even though the book described it as unpredictable. The book also indicated that the amount of wood ash lye I made would be enough for one pound of dry fiber, but only half of my husks fit. I cooked that half in the wood ash lye for hours and hours, and they still didn’t break down sufficiently. When I tried to pulp it by hand, the fibers would not separate even after an hour of pounding.

By putting the beaten fibers in a watery vat and swishing it around, also known as “hogging the vat,” I was able to get some good pulp to disperse into the water and pull out most of the bits that were still stringy. Even still, the tiniest remaining strings kept getting tangled in my homemade mould and deckle, so I became an expert at “kissing off,” the act of slapping your screen against the water surface to release the pulp so you can start over. In 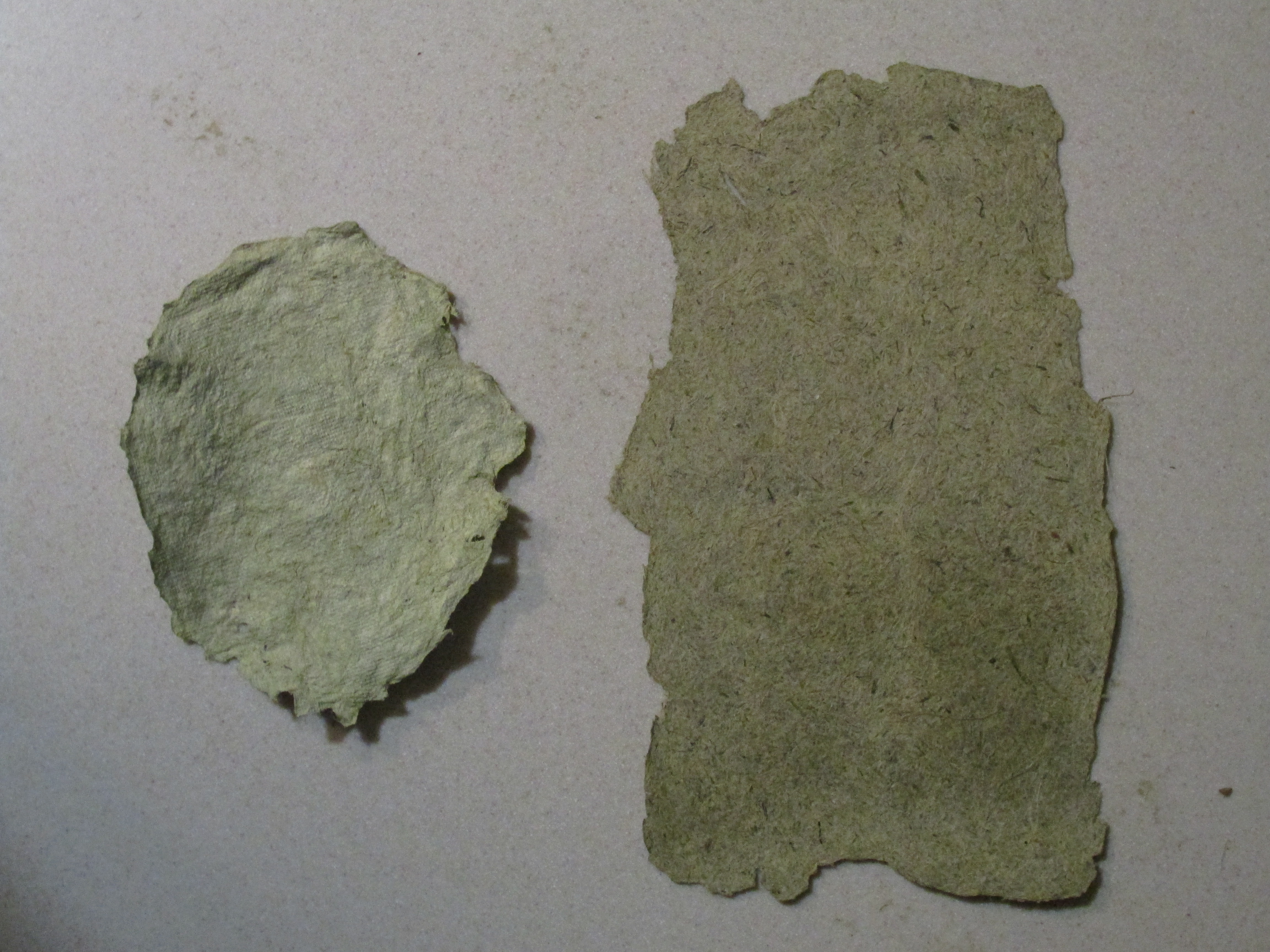 the end, I removed the bottom from an old drawer, placed it over a window screen, and used that as a deckle box. Fortunately, I remembered to wet the screen first this time and was able to pour the good pulp through it, then couch, press, and dry it. I ended up with one 11 x 17 sheet of paper. To preserve my materials, I poured the rest of the stringy fibers through the screen and dried them as 2 sheets of lumpy “paper.”

Despite my failures, I am determined to forge ahead. I may try cooking down my lumpy paper a bit more, and I still have half a pound of uncooked husks. And now, whenever I work in the garden, I can’t help but think, “Could I make paper from this plant? What about this one?”

“How to Make Paper from Corn.” Storm the Castle. www.stormthecastle.com/paper-making/how-to-make-paper-from-corn.htm

*Safety disclaimer: Alkali products can be dangerous. You should always wear gloves and goggles when handling any alkali, and you should have vinegar on hand to neutralize it in case of a spill or other accident. You also should not pour alkali solutions down the drain if you have a septic system.

Photo Credits: 1) Dried corn husks; 2) Partially beaten pulp; 3) Homemade mould and deckle and using a bottomless drawer as a deckle box; 4) The final product with the first try on the left and the second try on the right. All photos courtesy of the author.

Angela grew up on a dairy farm in Vermont and has degrees in biochemistry, horticulture, and science writing. She now lives in Maryland and has worked in the Gardens Unit at the US National Arboretum since 2012.