Scrunched up faces. Tongues sticking out. Sounds of choking and disgust. Unfortunately this is the usual reaction when I’m finally able to coax someone into trying medicinal herbs. When we move past the more pleasant plants like lavender, chamomile, and peppermint and delve into the deeper waters of herbal medicine, not everything is so user-friendly. Many plants taste bitter, smell like old socks, or even feel slimy. But often, it’s these same nasty characteristics that provide the therapeutic benefits we’re looking for. Let’s take a look at a few plants and see what makes them so “nasty” as well as useful.

Many people may be familiar with the distinctive aroma of valerian root; old socks, wet dog, and horse manure are just a few things to which the odor has been affectionately compared. In fact, the constituent responsible for the smell, valeric acid, is also one of the components that causes swine manure to smell so badly (Chi, Lin, & Leu, 2005). Despite its odiferous qualities, valerian has been used for its sedative effects for over 2000 years. Valerian root is taken to relieve anxiety, promote sleep, and relax gastrointestinal spasms (Braun & Cohen, 2006). Some research shows that another compound, valerenic acid, may mediate anxiety by binding to GABA receptors in the brain, although the exact medicinally active compounds haven’t yet been pinpointed (Benke et al., 2009).  It’s possible that valeric acid also has a role to play, as multiple constituents acting together may account for these effects (Spinella, 2002). 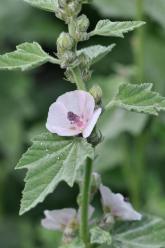 Glycosaminoglycans, the medicinally active polysaccharides found in marshmallow root, have an appropriate abbreviation: GAGs. Mixing the powdered root with water or preparing an infused tea results in a slimy, mucilaginous mess that can be difficult to choke down. But it’s this very sliminess that causes marshmallow to work so well at soothing irritated tissue. Marshmallow is used for coughs, as a urinary demulcent, and for irritated skin. The mucilage forms a bioadhesive layer that acts as a barrier, protecting the tissue and allowing it to heal (Deters et al., 2010). Extracts of the root have also demonstrated antibacterial properties (Lauk, Lo Bue, Milazzo, Rapisarda, & Blandino, 2003; Watt, Christofi, & Young, 2007). 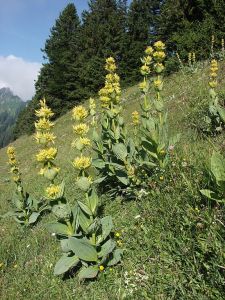 No pub or bar would be complete without a bottle of bitters, with Angostura® being among the more popular brands. Although the recipe for Angostura® Bitters is a well-guarded secret, gentian is listed on the label as an ingredient and is likely a major contributor to the bitter flavor. By itself, gentian is considered extremely bitter and has been used as a yardstick when rating the bitterness of other herbs (Olivier & van Wyk, 2013). Bitter compounds in general have been shown to stimulate the secretion of saliva and digestive juices by activating the vagus nerve (Bone, 2003). The active constituents in gentian, gentiopicroside and amarogentin, are no exception.  These molecules account for gentian’s use in improving digestion, increasing appetite, and relieving flatulence (Braun & Cohen, 2006).

What list of nasty herbs would be complete without pukeweed? This alternate common name for lobelia says it all. The emetic qualities of this plant were made (in)famous by Dr. Samuel Thomson in the 19th century. As a boy, Thomson would cause his friends to vomit by tricking them into eating lobelia leaves. Later in life, he founded the Thomsonian medical movement and employed lobelia and its purging properties as his main treatment (Loyd & Loyd, 1930). This unpleasant effect is attributed to lobeline, an alkaloid found in the above ground parts of the plant (Miller & Ruggiero, 1994). Lobeline is also responsible for lobelia’s therapeutic use as a bronchodilator and muscle relaxant (Hanson, 2005). This herb has been taken to relieve asthma, ease tense skeletal muscles, and calm nervous anxiety (Snow, 2009).

As you can see, even though some plants might make you want to “lose your lunch” or plug your nose and run for the hills, we should embrace them as they might be the very thing needed to help us feel better. Perhaps this perspective will help make ingesting nasty herbs a bit easier to swallow.