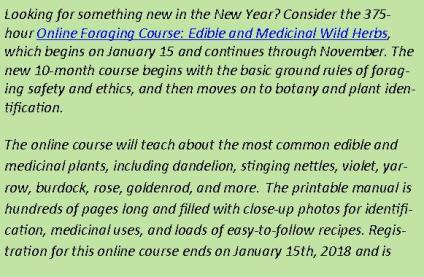 In my practice, I favor plant species with a sizable population—preferably widespread over a large geographical area—and avoid using rare or less populous species. I won’t harvest rare plants from the wild at all, and I teach my students the same. Along these lines, you can start by avoiding the harvest of woodland medicinals and instead favor the weedy medicines of field and pasture. If you’re unsure whether a food or medicine is abundant in your area, you can consult resources like the United Plant Savers and state and federal listings of endangered and at-risk species.

Never harvest a plant without first assessing its population and the pressures it might face from habitat loss or commercial demand. For example, a plant may be locally abundant, but if there’s a widespread demand, it can quickly disappear, its population decimated from overharvesting.

One of the first things I consider when choosing which plants to forage is whether a plant is native and tied into local food webs or is an escapee from other lands. Nonnatives displace native species by competing with them for natural resources. These opportunistic plants haven’t evolved locally with the same checks and balances that native plants have experienced, and so they often flourish. This makes them prime forage for humans, especially because they stick close to places we inhabit, thriving in cities, gardens, fields, and the like. In the southeastern United States, many of our most common wild weedy medicinals are nonnatives, including multiflora rose (Rosa multiflora), Japanese honeysuckle (Lonicera japonica), mimosa (Albizia julibrissin), burdock (Arctium minus), and many species of blackberry and raspberry (Rubus spp.).

For those who grow a garden, wild weeds will naturally make themselves at home—and can peacefully cohabitate with planted veggies and herbs. You can employ plenty of tricks to help them play nice, and, as a reward for acting as a botanical referee, you’ll harvest even more food and medicine from your garden! This is the bounty that grows in between: the medicine and food that you didn’t plant yet still get to reap. My plant friend Frank Cook, who has passed on, used to teach in his classes that more than half the bounty of a garden could be found in the “in between” in the form of useful opportunistic plants. People all around the world capitalize on this abundant resource, casually “cultivating” weeds in the in-between spaces.

Let’s take lamb’s quarters as an example of this useful-weed-and-planted-crop-polyculture method. Lamb’s quarters—also called wild spinach—has more fiber, beta-carotene, vitamin C, zinc, and calcium than cultivated spinach. Why would you weed out such a nutritious plant that doesn’t need special care or insect control to make room for less nutritious vegetables that are harder to grow?

In my garden, I leave the wild spinach that comes up between recently planted vegetable and herb crops. After harvesting the wild spinach for a few weeks or a month, the veggies fill out, and then I pull out the lamb’s quarters and use them as mulch for the planted crops. Wild spinach requires no cultivation after it finds its way into the garden and is relatively disease- and insect-free. 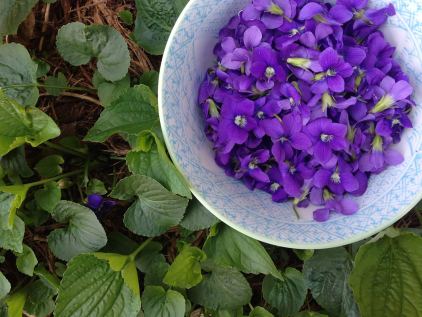 Even when you gather plentiful (possibly pesky) plants, be attune to a code of ethics. You’re interacting with living, breathing beings. Take only what you need, leave beauty in your wake (leave no trace), and bring an offering to make before you go—a song, some water, your hair, a handful of grain. An offering invites a feeling of gratitude, reciprocity, and reverence. If you’re more science-minded, perhaps you’ll take a moment to breathe intentionally, meditating on the reciprocity of plant-human gas exchange, cellular respiration and photosynthesis. You might feel silly at first, but allow yourself the opportunity to be surprised. This is how we participate in the ancient plant-human dance of mutual connection, communication, and care.

If the plant you’re harvesting is native—and you’ve already assessed that it’s abundant enough to harvest—be extra conscientious about not overharvesting. If you’re harvesting an herbaceous plant with multiple stems, take only a stem or two from each plant. Spread your harvest out over a larger area and be sure to leave plenty of flowers and fruit for the plants to reproduce. If you’re harvesting roots, replant the root crown or take only a portion of each plant’s root system. When digging up roots, be sure to cut back the aboveground parts so the plant doesn’t become stressed for water with a root system that no longer matches its aboveground growth. These regenerative practices don’t necessarily need to be followed for invasive weeds with global distribution.

It’s important to avoid gathering plants near roads, railroads, and power lines, as the surrounding soil is typically contaminated with lead, herbicides, and other toxins. Always harvest at least 30 feet from the road and make sure you are not harvesting in an area with environmental toxicity (such as the flood banks of a polluted river). Even hay fields that appear to be untended might be sprayed with herbicides.

The foundations of older homes are also problematic, as they are typically sprayed for insect control or weeds. If you live in the city, consider visiting a local organic urban farm or community garden, where you’re likely to find an abundance of yummy weeds, along with gardeners who are happy to share the bounty.

If in doubt, do NOT harvest! Consult your local extension agent, master gardener, or trusted herbalist if you need help with identification. If someone else shows you a plant, do your own homework and make sure that they are right before you harvest. Spend time with plants over the seasons—double-checking both photographs and written descriptions—before you make your move. Learn the poisonous species in your region. Chant to self: COMBINATION OF CHARACTERISTICS FOR PROPER IDENTIFICATION. This is crucial. Identifying plants requires that you look at a combination of specific traits (rather than one or two traits alone), essentially differentiating your plant from the herd.

I’ve learned from teaching wild foods classes over the years that the beginners are often the ones who are appropriately cautious, whereas the folks who know a little more can get bold, lose their cautiousness, and make the wrong move. One wrong move can end up being your last move! There are over a thousand species of poisonous plants in the world, some of which are so poisonous that one to two bites are enough to kill an adult.

Here are a few poisonous plants to learn before you start foraging. This is not a comprehensive list of poisonous plants, which will vary depending on your bioregion. Consult local field guides, governmental websites, and extension offices.

Here are some resources for helping with plant identification:

Always ask permission from the landowner if harvesting on private land. If you want to harvest on governmental land,  check with the managing agency for regulations and permits. Be aware of the different classifications of land management. In the United States, national parks are often visited for their natural beauty and are not generally logged or leased for grazing cattle. The U.S. National Forests are often managed for resources and may be clear-cut and grazed by cattle. You can often obtain permits to gather wild plants for personal use from your local U.S. Forest Service.